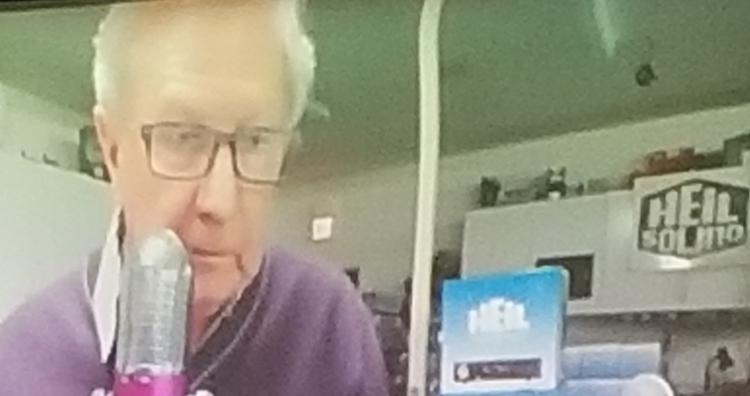 SVRC was honored and delighted to have Dr. Bob Heil of Heil Sound to speak to the March meeting of the Sangamon Valley Radio club about his fabulous journey into audio engineering and amateur radio over the past 50 years.

Growing up in Marissa, IL, Bob started in amateur radio as a youngster in the 1950s when the bands were wide open.  His Mom and Dad were pretty cool to let Bob erect a 100’ tower in the back yard to support his ham radio activities. Still using his originally assigned call, K9EID, Bob remained at the Technician level for 17 years.

In the early days of ham radio Bob heard some odd sounds which turned out to be single sideband, or SSB, on 6 meters.  He lucked into meeting the chief engineer at KMOX (CBS radio) in St. Louis who taught him how to build an SSB transmitter and a transverter and soon began building all kinds of radio related equipment.  Bob was one of the first ten people in the country to build a 1 KW amp on 6 and 2 meters and was asked by Mr. Bob Drake to provide a technical paper to the folks at Dayton Ohio.  Soon he was experimenting with 2-meter antennas and moon bounce in 1962.

One of Bob’s earliest jobs was to assist playing the pipe organ at the Fox Theatre in St. Louis.  The pipe organ included pipes as short as 1” and as tall as 32’.  He was responsible for tuning and voicing the pipes which depended on learning about harmonics and listening.  Bob credits learning how to listen as laying the foundation for his career.

Eventually Bob opened a music shop and sold Hammond organs.  After he started renting them to musicians coming to St. Louis, he became acquainted with numerous music groups who were becoming well known.  Dolly Parton was one of his earlier and well-known customers as was Joe Walsh of the James Gang and fellow ham who became a life-long friend.  At this time, he also discovered that Kiel Auditorium had a lousy P.A. system.  He started building P.A. systems for these musicians using the knowledge he had acquired through amateur radio.   At this time Bob also provided the house sound at the Mississippi River Festival.

Then came some unusual requests:  Jeff Beck needed a large P.A. system, but it had to fit through the door, Jerry Garcia needed an entire sound system because his equipment was stuck in California along with their sound guy who was incarcerated.  The Grateful Dead wrote a song about that fateful night at the Fox Theatre in St Louis.  Then there was ZZ Top back before the beards.  One day a call came into the organ shop from the manager of The Who.  “Who are you?”  Bob asked. “The Who” came the reply.  The Who also wrote a song about that.  "You can’t make this stuff up," Bob says.  “We need you in Boston.”  “When?”  “Tomorrow.”  “Huh?  I’m in Chicago working with Chaka Khan.” Bob was already shipping sound systems using 40’ semi-tractor trailers which was ground breaking at the time.  The Who manager suggested chartering a 707 jet.  As long as The Who are paying for it!  Bob, singularly, was changing history in the music business with his sound products.

Bob gets a call one day from Paul Klipsch, the father of high fidelity folded-horn speakers who wanted to pick Bob’s brain and see Bob’s twenty kilowatt P.A. system. In turn, Bob gained some technical knowledge of phasing and tuning.  The Fletcher Munson Curve is vital and should be taught to all ham radio operators, in fact, it should be on the ham radio licensing exam.  The sound produced at higher volume should be equally pleasing to the ear as at low volume.  However, at high volumes, the frequency responses flatten out causing a harsher sound. This is true for music as well speech coming through your ham radio.  Without equalization, louder isn’t better.

Bob also heard from the owner of iCOM who wanted to improve the sound quality of their radios.  Bob was honored to have been consulted by the radio manufacturers to improve ham radio.  To build the EQ 200, they wanted Bob’s expertise.  About 8-10 years ahead of the curve, the EQ 200 audio equalizer changed ham radio.  Today, the EQ 200 is in the All iCOM radio starting with  their PRO 1 through the line up to the 7300 and 7610.

In a phasing demonstration using a pair of marked red and blue microphones, Bob showed us that doubling your power only results in a gain of 3db and is hardly noticeable. The moral of this story is to save the $1,000 cost of an amplifier and just give it to your wife to buy shoes!

Then Bob demonstrated phasing by reversing the polarity of one of the red and blue test microphones. By speaking into both at the same time we saw that the resultant audio was reduced by 40 db.  He explained that that was the basic principal behind receiver noise blankers as well as directional antennas and just about everything related to AMATEUR RADIO.

Save money on antennas; for an addiitonal $23, you can make your own PHASED ARRAY.  Put up two 64’ poles (old telephone poles are free from a co-op), set them 64’ apart.  Install 43’ of coax and a switch to selectively change the phasing of the two.  He said he gets 15 to 20 dB front to back (about 15 dB on 75 meters and 15 dB on 40 meters). You don’t need a tuner. They don’t work anyway and waste time, money and power. The schematic for this antenna is on Bob’s QRZ page.  Check it out.

With the newer knowledge of phasing and tuning, Bob set out to improve Joe Walsh’s microphone.  Microphones had a bad habit of picking up extraneous noise that was detracting from the music.  Remember the big antenna?  When you turned it around, you couldn’t hear anything.  Joe wanted that for his microphone.  As such, building this microphone led to a new music and talk radio industry standard in microphone technology.

Back in the day, Peter Frampton’s girlfriend wanted to give him something special for Christmas:  not another guitar, but something really unique.  Bob developed the Talk Box for Joe Walsh which was used in the Rocky Mountain Way song then made one for Peter Frampton as well.  Most of us recall what Peter Frampton did with it in Frampton Comes Alive.

Bob spent a lot of time trying things out and tinkering around to see what came up.  Bob worked backstage during various tours with these bands, soldering, repairing, and making all kinds of adjustments on the fly.  The big take away is that in order to learn how things work and how to improve them, you have to get in there and experiment. Just try different things and see what happens. His goal is to share the science with fellow hams.  More recently (January 2018), QST magazine featured Bob’s 5-watt DIY pine board project on the cover.  It’s an opportunity to experiment with ham radio components to discover how they work.

Heil Sound is the only sound system to be honored into the Rock and Roll Hall of Fame.  Eventually, University of Missouri (Mizzou) granted him an honorary PhD in music and technology.  When asked how he felt, he said he thought about his stepson who spent 16 years working on his doctoral degree. Bob was reminded that it took him 50 years to get his: just a radio-crazy kid from Marissa, IL.

Dr. Heil shared a pet peeve he has with the audio manufacturers about their junky little speakers.  None will publish the specs on their audio. What about putting an equalizer in the receiver?  Dr. Heil went on to create the Parametric Receive Audio SYSTEM (PRAS).  It contains two headphone amplifiers:  left and right speakers with separate controls as well as an equalizer that couples a Parametric equalizer-variable level with selective frequency control.  This allows the user to improve the audio for their specific needs, particularly when the user’s hearing is imbalanced.  PRAS products are in now ham radio equipment, televisions and  computers.

Personable and gracious, Dr. Heil is still playing the pipe organ and can be heard on HamNation. Thanks to Dr. Heil for sharing his knowledge and time.  Thanks to the Sangamon Valley Radio Club event committee for bringing Dr. Heil to our club meeting via Skype.  Fantastic presentation! 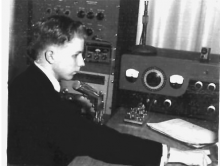 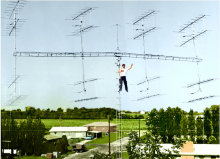 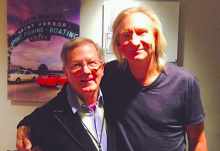